A PB isn’t always about a finishing time

It’s been a tough start to the year for me and my running. Since before Christmas, I’ve had dozens of physio visits, been taped back together, eaten painkillers for breakfast and occasionally found time to do a plethora of strange exercises designed to make my muscles behave. Sometimes it feels like for every step forward, there is a step back.

While my right calf, left hip, left glute and lower back argue over which one will cause me the most discomfort on any particular day (or occasionally surprise me by cooperating!), my brain has also been tormenting me­ – I haven’t broken a PB in months; I’m not getting faster; I’m not running further. This lack of statistical improvement sometimes has me questioning why I keep going. 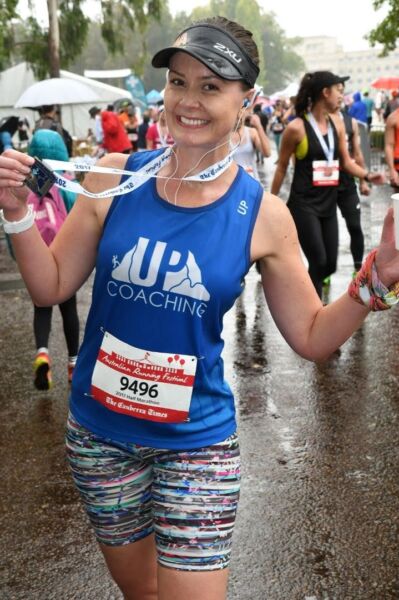 Injury sucks but there has been a silver lining. I’ve had to slow down to heal and strengthen by body, which has led me to reframe my thinking. I no longer feel compelled to try for a PB every time I put on my running shoes. Training is training, not a race. In fact, even races aren’t always races. Racing has become about running smart and having realistic expectations.

This brings me to the 2017 Australian Running Festival half marathon in Canberra. When I signed up for this event, I thought I’d be fully recovered and that it would be my opportunity to strive for a half marathon PB. As the weeks turned into months, and I hadn’t run more than 14k without stopping all year, it became apparent that it would take a miracle to get a sub-2 hour time in Canberra. So I moved the goal posts.

Instead of focusing on getting a PB, I had these goals in mind: 1) run to at least 15k, making it my longest continuous run of 2017 so far; and 2) be kind to myself and enjoy the experience.

I set off behind the 2 hour pacers but within the first kilometre I had overtaken them. I was running easy but as the course was downhill at that stage it made sense for me to make the most of the free energy. At 8k I was running so well I was on track for a 10k PB but I slowed down to have a gel at 9k so I’d be able to wash it down at the 10k drink station.

Oh how I loved running in the rain! My music was going and I was now more than a few hundred metres ahead of the 2 hour pacers.

I kept my pace going up the hill coming into 11k, but looked at my watch and realised I was behind pace to get a sub-2 hour half. The pacers were still behind me but I suppose they were aiming for even or negative splits whereas I knew I’d be much slower in the second half of the race.

By 14k I was fatigued. People had started passing me. I’d passed the point of my longest continuous run for the year and just wanted to hang on until 15k, which I did.

This point coincided with the onset of stomach cramps. I gave myself permission to walk. The 2 hour pacers ran past me. I think I walked more than I ran until the 18k mark, and then I knew with only three and a bit more ks to go, I could run it home. I knew it wouldn’t be a PB but I wasn’t worried.

“Run home strong,” I told myself as I ran over the last bridge. I started counting down the rest of the race in minutes left to run rather than the distance still to cover. Sadly at 20k those stomach cramps got the best of me and I had to walk a few hundred metres again. When I rounded the corner and could see the finish line, I knew I had to keep running, even if it was slow. The rain was teeming down and I was soaked to the bone. I crossed the finish line and stopped my watch. It was the second fastest half marathon I’d ever run officially, but even better was that I’d finished the race still smiling. I’d achieved everything I’d set out to achieve that day (and even set a sneaky personal record for 15k).

The Australian Running Festival half marathon was a great course – a few reasonably gentle hills but nothing too scary, and a good way to see Canberra. The atmosphere was amazing, despite the weather, and I’m already planning to go back and give it another go next year.

Even though another race passed by without breaking that sub-2 hour goal I still felt like I ran the best race I could that day. A personal best can be about more than just the finishing time, and this year I intend to be more open minded with my definition of success.

Bonus prize: In my last few races I’d worked out that if I tuck my running belt UNDER my high-waist RunFaster tights it keeps it nice and snug and stops it bouncing around. This turned out to be an even greater blessing because I hadn’t realised that I’d forgotten to do up the zipper on my running belt after I got my gel out. I ran for over 12 kilometres in the pouring rain and nothing fell out or got wet!

Get $10 OFF your first purchase!
Be the first to know about new arrivals, health & fitness tips, special promotions and exclusive offers! Simply sign up and check your inbox for your code. You can use it straight away!